I’ve been waiting for a Korean language dictation program to come out. I used a Korean voice recognition program which I don’t even remember the name of now 10 or more years ago, but I stopped using it because the program couldn’t keep up with my computer’s specifications. There are fairly good programs in English which I’ve posted on the resource page, but there aren’t many Korean language dictation programs. I’ve looked for one for a long time without any luck, but I think I found one, though I’m not sure how long it’s been around. (I’m very excited about this…)

The answer was Google. I can use Korean voice recognition when I browse on my desktop or smartphone, so I wondered if I could use this for translating, too. I played around with it a bit, but it was too difficult to try and connect small parts together into another document, so I didn’t use it. But then I found that you can use voice recognition in dictation format in “Google Docs”.

Let me show you.

I’ll start from the beginning for those of you who aren’t familiar with Google Docs. First, go to Chrome (a browser developed by Google), open a blank page, and type in “Google Docs” to go to the Google Docs page. You can do this search using voice recognition as well, but I’ll just focus on the dictation program now. If that’s too tedious, just click here. 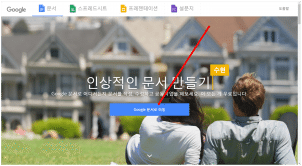 If you scroll down that page, you’ll find a lot of useful explanations, but my goal here is to teach you about the voice recognition program within Google Docs and how to use it when translating, not to show you how to use the Google app, so just click what the red arrow is pointing to above. 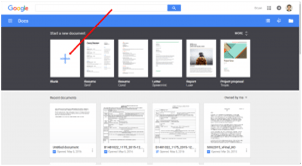 Then you’ll see a couple of templates and documents you’ve used previously. Click on what the red arrow is pointing to above, and you’ll open a new empty document. 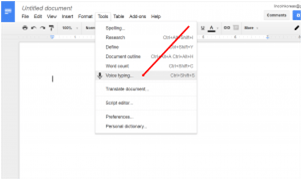 The document that opens, as you’ll see, is not that different from an empty document in Microsoft Word. Even the keyboard short cuts are similar. You can type, draw tables, insert images, and edit this document. Take your time getting used to the functions of Google Docs. For now, just click on what the red arrow is pointing to above (Tools -> Voice Typing). 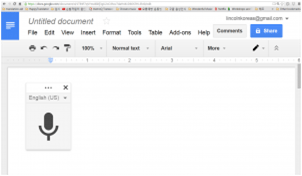 Then you’ll see a screen like the one you see above. Those translating from Korean to English can now use it as is. After you click on the mic, the words you speak will be typed into the document. It will not be as accurate as the program I use called Dragon NaturallySpeaking. That’s probably because I’ve used Dragon NaturallySpeaking a long time and have trained the program to understand my accent. Also, you can’t insert commands, periods, commas, etc. with voice recognition. But that’s okay. It’s not like I was expecting a perfect voice recognition program, so this is satisfactory for me. Maybe I should withdraw my recommendation for Dragon NaturallySpeaking…

What about for those translating from English into Korean? In that case, just change the recognized language. 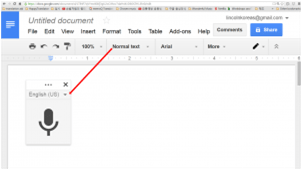 If you click on the small arrow pointing downward next to English (US) as you see above, you’ll see a whole list of languages. At first I was so disappointed when I didn’t see Korean, but I saw it when I scrolled to the very bottom. 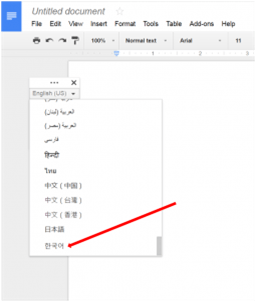 Click on ‘Korean’ and see what happens when you speak into the mic. I use a wireless mic connected with a USB stick. (Wireless mics are comfortable, but cable mics perform better.) 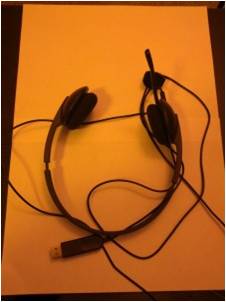 When I tested it out for the first time, I spoke into the mic for a while. This is what I got:

It’s hard to see because the print is small, but recognition was fairly good. (You can see a larger image if you click on it.) To test the voice recognition, I spoke ‘period,’ and ‘next line’ out loud, but it didn’t work very well. But other than that, everything else was recognized fairly accurately. This is incomparable to a program that came out in Korea a long time ago. I’ll just have to deal with unrecognized commands.

It’s not perfect but if you use this program (without worrying about typing), you can just speak while looking at text, so your concentration will increase and fatigue will decrease. You won’t be able to use it for all translation work, but there are probably many projects for which you could use this program. It’s likely to be very useful for documents with easier content and a lot of text, although it’s up to you to decide how and when to use this function. I probably won’t edit text within Google Docs. I’ll copy the text into Microsoft Word after voice recognition is complete (Ctrl+A, Ctrl+C, Ctrl+V) and edit from there.

You should try it on your own work.