The Blue Board is an agency evaluating tool on ProZ. It’s a useful tool for freelance translators who look for and meet potential clients on the Internet. On the Blue Board, numerous users record their experiences over a long period of time using the score system and their comments.

There are other tools that evaluate potential clients, and perhaps it’s dangerous to place too much confidence on the Blue Board. However, in my experience, the Blue Board is the most important evaluation method and should be used before any other tools. Translators must meet potential clients online, evaluate them, and decide whether or not to work with them. On the Blue Board, a good number of translators have collectively evaluated clients over a long period of time. It’s better to make an objective decision based on this information rather than making a subjective one without much experience and knowledge. The Blue Board must be used first because checking out potential clients there takes a relatively short amount of time compared to other methods. It’s much more effective to weed out clients using the Blue Board first and then using additional methods to find out more about them.

[bctt tweet=”Blue Board is the most important evaluation method and should be used before any other tools.” username=”HappyKoreas”]

To use the Blue Board, you can type the company name in the ‘search box’ in any window when you are signed in.

You can also just press enter without typing any name, too. Then, in the next window that appears, you can check the Blue Board box and then type in the name of the company you want to look up.

But looking up companies on the Blue Board is not as simple as checking your watch for the time. The score is important, but there are other important factors as well. Let’s take a look at some factors that need to be considered when you use the Blue Board. 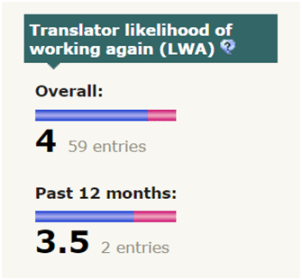 The score is the most important indicator and the quickest method when it comes to evaluating agencies. What is a good score? There’s no correct answer, but for me, I think around 4.5 is a good score. 4.5 out of 5 is about 90%. Some of you may think this is too high, but it’s actually not. You need to consider that most people find it easier to upload positive comments than negative comments. People usually give negative comments when they are so upset that they’ve decided not to work with that agency anymore. Then, 4.5 is not really a high standard. Also, it’s just a benchmark. It doesn’t mean you’ll never work with an agency below a 4.5 score, nor that you will immediately work with an agency that’s above 4.5 no matter what. You also need to consider the factors below.

When the ratings were provided and how often

The Blue Board gives two scores for each company: the overall score and the score during the past 12 months. The former refers to the average of all the scores, and the latter refers to the average of the scores input during the last 12 months. They are divided in this way to help translators evaluate the company. For example, an agency has a total of 20 evaluations, but they’ve all been made in the last 12 months. You can’t make a final judgement based on this fact, but it’s important that the scores have not been input over a long period of time. The possibility that the agency is new is quite high. A new agency with high ratings is still worth considering. But you must also be aware that they could have been fabricated, because it’s quite difficult to obtain so many evaluations over short period of time. In this case, you’ll need to go through all the evaluations to see who gave what rating.

Whether or not a company deliberately manages their score

Agencies care about their Blue Board score, and this can be beneficial to translators because collectively, they have power. An agency does not need to worry so much about their score if they already use honest business practices. But you’ll see some agencies that leave a thank you message in response to each and every evaluation of their company, which can be hundreds. This isn’t necessarily a bad thing, but it can mean that this agency deliberately and painstakingly manages their score. For these agencies, it’s probably smart to carefully observe the content of people’s evaluations. The agency might ask a translator who’s completed one of their projects to ‘please post a positive review.’ The translator might easily agree to do so in hopes of maintaining a good working relationship. They’ll probably give a 5-point score with a short, simple comment. Make sure all their reviews aren’t like this. If the agency managed to raise their score over a short period of time with such ratings, it’s probably a sign of some scam. They could easily scam translators who merely look at the number when they evaluate an agency. Once translators realize they’ve been scammed, the agency’s Blue Board page will explode with negative comments. The agency then will change their name and start over. With a new name they can provide small projects to a number of translators and start a new Blue Board page. Therefore, be careful when you come across an agency on the Blue Board with a high number of good ratings over a short period of time.

People upload negative reviews for various reasons. Each person has different standards—some people may give a bad evaluation for something insignificant. You’ll also come across comments where the translator is clearly at fault but gives the agency a bad review. There are translators who even post reviews for the wrong company because they’ve confused company names—quite unfair to the company that receives the negative review by mistake. The agency usually responds by protesting that they’ve never worked with this person before. Their fairly good score may dip a little because they were unlucky to receive such a review. It’s probably safe to work with these agencies. However, I’ve also seen agencies that have quite a few negative ratings but deny all of them, saying that they don’t know the translator. It’s highly unlikely that so many translators confused the name of an agency—the agency is probably lying. The company then strikes out immediately. Also, see if the complaints are about payment. No matter how good the agency is, if it has constant issues with payment (late payments, confusion over payment, etc.) and keeps providing excuses, no one will want to work with them. That’s why it’s a good idea to see why translators have uploaded negative reviews. (You can look up Blue Board scores on ProZ even if you don’t have a subscription and when you aren’t logged in. But you need to be logged in as a subscribed member to access the comments.)

When the negative reviews were given 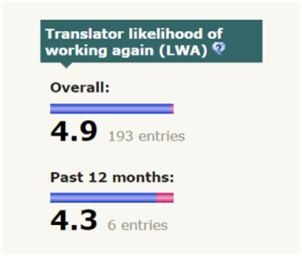 Sometimes when an agency hires an ignorant or rude employee by accident, their Blue Board score can suffer. When those managing the agency find out about this employee, it’s often already too late. They may fire the employee and apologize to their translators to restore their working relationship. (But it may be difficult to make new relationships with good translators, though things may get better as time passes.) For this reason, it’s a good idea to find out when the negative reviews were given. If an agency received bad reviews because of a certain PM or accountant for a concentrated period of time three years ago, but has had continual good reviews since that time, I think it’s probably okay to work with them. The agency could be a good one, but is suffering because they hired one bad employee by mistake, though that employee no longer works for them. The screenshot above shows the score of an agency I know. I did some research and found out that their recent scores have been relatively low for the reason I just mentioned. Translators gave the agency bad reviews because they continued to contact the bad employee who never responded (she had already moved on to a different job). It’s the agency’s fault for not removing that employee’s email from their list, but it’s also the translator’s fault for not attempting to find out what happened. A phone call would have revealed to them what happened to the employee. One bad review can lower the average score greatly because there may not be that many reviews in the first place. My point is that an agency’s score can be low for these reasons, so make sure you understand why.

Be wary of agencies that have maintained a high score for a long time, but have recently been getting very low rates. They could be going bankrupt or they could have hired a bad employee. Do a little more research to find out the reason. If you feel that one of these reasons apply, it’s best not to work with them.

Then, what would an ideal agency’s Blue Board look like? It would vary from agency to agency, and there’s no one ideal, but the following is what I like to see:

This screenshot is an example:

For over 10 years, this agency has only received 4 reviews (they are all far apart) and their average score is 5. There are no replies from the agency. (This may be an extreme example, though.)

What does this mean?

Though the Blue Board is an important tool that translators should go to first, it’s not perfect. There are some limitations and precautions.

1) Some agencies have no reviews 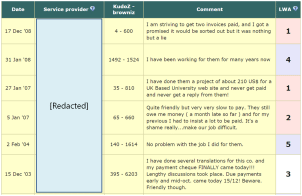 This is no one’s fault. It just means that no one’s left any reviews. It could be because the agency is too small or insignificant in the market. But you also can’t eliminate possibility that the agency just created a new name for themselves after running their business with questionable practices.

If an agency’s Blue Board looks like the screen shot above, no one (besides very beginners who are really uninformed) will want to work with them. That’s why there are no new reviews after 2008. The agency has just gone out of business. But instead of bowing out of the market gracefully, they could have come back in 2009 with a new name. It’s a bit extreme to think that all agencies with no or few records are like that, but translators usually decide not to work with them from the beginning, or conduct more thorough research before making a decision.

2) The agency may have a high score, but their rates are low and they deal with projects that aren’t suitable for me

You can use all the methods listed above when using the Blue Board, but it will not guarantee the best judgment. The most important deciding factor for a translator is the type of projects the agency deals with and the rates, but these are not reflected on the Blue Board. Translators who leave reviews for an agency have already agreed to their projects and rates. I don’t work with agencies from certain countries even if they have a high Blue Board score. I don’t judge people based on their nationalities, but agencies in certain countries just have very low rates. The Blue Board does not help you detect these factors.

3) An agency’s specialization as well as other factors